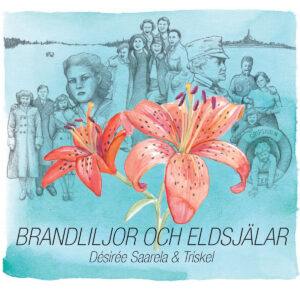 Désirée Saarela & Triskel’s (2011- ) music is strongly rooted in the singer-songwriter world, but also offers a new and original way of expressing the folk music of today. Their music is timeless and the atmosphere is filled with a lot of heart, joy and the power of storytelling. The lyrics and music are in Désirée’s own handwriting, and she sings the songs in her mother tongue, Swedish. Their new album Brandliljor och Eldsjälar (Fire lilies and Trailblazers) will be released on the 16th of April 2021, containing songs based on true stories told by different Finland-Swedish women.

The listener is taken to times such as the beginning of the 20th century, Finland’s civil war and the second world war, and is given a glimpse of what it was to live back then, all from a woman’s point of view and from the minority perspective of the Finland-Swedes. Follow Désirée Saarela & Triskel’s musical journey through history as it is reflected in the present moment through an interesting mix of storytelling and different landscapes of sound from the Finland-Swedish and Finnish soundworld.

Arrangements: Désirée Saarela & Triskel, each band member has contributed with his/hers creativity and music to this album.