Désirées path as a singer-songwriter started in her home city Helsinki, Finland in the 1990s. The Irish music boom sparked her interest in folk music, and the folk rock band Jane Raven was born. The band did many live gigs performing their own music, and released an album called Circles. Désirée’s characteristic songs have been compared to those of the likes of Joni Mitchell, Joan Baez and Ulf Lundell.

As a folk singer, Désirée’s work has centered on the Finland-Swedish folk music and folk song traditions. She carries the songs and stories of bygone times into our present day with her own interpretation as a storyteller. The traditional songs and Désirées own voice meet at a crossroads between traditional folk singing and newly written songs.

Désirée has qualified as a music pedagogue with folk song as her major (Novia University of Applied Sciences, Jakobstad, Finland, 2010). Désirée also has a masters degree from the Sibelius Academy at the University of Arts Helsinki, where she majored in folk music in December 2013. Désirée was born in Helsinki but currently lives in Pedersöre in Ostrobothnia on the west coast of Finland. 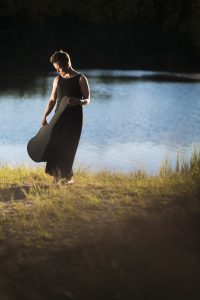 Désirée has released and produced several albums of her own material